Among the spiritual families raised up by the Holy Spirit in the Church, that of Murialdo brings together men and women religious and all those lay people who feel called to follow Christ in the footsteps of San Leonardo Murialdo.

Among the spiritual families raised up by the Holy Spirit in the Church, that of Murialdo brings together men and women religious and all those lay people who feel called to follow Christ in the footsteps of San Leonardo Murialdo.

In reciprocal vital communion, but in different ways and forms, they make Murialdo's charism present in the life and mission of the Church.

Within the Murialdo Family, the reality of the Murialdo Lay Communities has a more intimate location which, organized in a specific way, welcomed and recognized by the Josephites and the Murialdine Order, is identified in the following peculiarities.

The laity who wish to share Murialdo's Charism, according to the proposal of the "Murialdo Lay Communities", recognize as indispensable characteristics of their being:

The CLdM in Italy share a unitary training path that provides for the study of the following contents:

Who is the "layman" in the Church

What connotes the "Lay of Murialdo"

The growth and life of a Murialdo Lay Community is achieved, in adherence to the characterizing elements, according to the following methods:

The L.d.M. and, more precisely, the C.L.d.M. they are born in an already committed lay context.

Since 1980 in Viterbo some young collaborators (initially from the Works of Vicenza, Rome and Viterbo) met for a few days of meeting-study.

Participants are significantly more numerous from year to year until in 1986 it is decided to have two separate meetings: one for the new ones, the other for the veterans. The latter is attended by 21 collaborators from Padua, Milan, Thiene, Foggia and Viterbo who, in a final document, express the need for a more in-depth training path, a reference group for the choices made and identify, in about ten points, some commitments to make and the request of a Josephan confrere and a lay animator. Two elements seem particularly important: the vocation (albeit in terms of clarification) and the request to belong to the Congregation.

In 1987 a group from Foggia (C. Bruno, M. Calafati. R. Rinaldi, A. Lauriola and N. Stinelli, F. Monaco) made a promise in the presence of the religious community.

This last proposal becomes the WEEK OF GIUSEPPINA SPIRITUALITY (Celleno August 7-13, 1988). The laity identify themselves as Lay Josephites and draw up a document as a particularly intense formative spiritual itinerary (prayer and, possibly, daily Eucharist, spiritual direction, monthly meetings with the religious community ... Promise as consecration in service ...).

In Brunico in 1989 the lay people present, coming from the three Italian Provinces, in addition to the document discussed and verified, made an express request to belong to the Congregation.

In 1990 in Salice d'Ulzio the denomination of Laici Giuseppini was passed to that of Laici del Murialdo, which indicates not only a relationship with the Josephites but a belonging to Murialdo himself, thus opening up the possibility of experiences also with the Murialdine women (later we will start talking about joining the “Murialdo Family”). On this occasion, an official recognition is requested as a guarantee of the sharing of the charism by the laity, collaborators or not. This belonging is understood to be possible in different forms: individual, aggregate or through a choice of lay consecrated life. The Promise remains a fixed point and we still continue to talk about the group. It includes a series of commitments: daily prayer, the Eucharist at the center of one's personal and / or couple life, ongoing formation, behavior in keeping with the basic choices ... The inclusion of new ones is requested to take place upon presentation of a request from the person concerned that the person in charge of the group will send to the national delegate of the Congregation of Josephites or Murialdine who will be able to accept it or not. It is important that acceptance takes place after a period of collaboration with an Opera or a community (Josephine or Murialdine) and specific training.

Three provincial delegates were identified in Stignano in 1991 (P. Veneta: P. Rino Cozza; P. Piemontese: P. Carlo Fasano; P. Romana: P. Antonio Barone) two meetings of the representatives are proposed, the Liaison Sheet has a more precise physiognomy but, above all, we begin to talk about Community.

1992: Acqualagna. On this occasion we expressly identify ourselves as a Community. We invite you to precede the Promise with a period of preparation and to have it followed by a verification. The Liaison Sheet is better structured and the Community of Rome suggests a revision of the Reference Points.

In 1993, in view of the XIXth General Chapter, the Communities of L.d.M. they send a letter to the Josephites and the Murialdine Regions in which they express some reflections and some requests referring to the P.d.R. already processed. The themes of the letter are: "Formation", "Murialdo's Family", "Areas of operation" and ... "Various". In response there are the Chapter Deliberations and a Letter from the Murialdine Order. In the resolutions at point 3.3.3. Vocation is underlined and the following traits that distinguish us are identified: vocational characterization, spiritual identification, apostolic identification, lifestyle consistent with charismatic traits, community spirit and the Promise as a publicly expressed commitment. The Deliberations were sent to the Communities of the Roman Province on 8 December 1994 with a dedication by Fr. Cesare Cotemme who sees us as a "new seed that falls in the Roman Province. In the letter, Sr. Orsola mentions the journey of sharing made with the laity and points out some “facets” of the charism: the first custodian is the Congregation of the Josephites, but she does not exhaust it; the Murialdine sisters have the same charisma with an accentuation of the Eucharistic aspect and, from an apostolic point of view, the extension to families. It also shows willingness to promote, ensure, encourage, participate in the team provided for by the Chapter Deliberations of the Josephites.

On November 26-27, 1994, at the meeting of the representatives, it was decided to revise the P.d.R. so that they are “more current and more ours. The new document should be drawn up from the perspective of the L.d.M. who have discovered their own vocation and in the perspective of the Murialdo Family which highlights the desire and need for integration between secular and religious realities ". It should also answer the questions: "Who are the LdM?", "How do they intend to fit into the FdM?" It must be clear and explanatory for those unfamiliar with the reality of the L.d.M.

In 1996 the Communities of Trento-Laives sent a proposal to modify the P.d.R. Foggia and Lucera express their indications and at the meeting of the representatives on 30/9 - 1/10 both documents are read and delivered to each representative. Fr Geraldo Boniatti invites you to specify the apostolic, "practical" aspect and Tiziana Sansonetti invites all the communities to send personal and community written contributions to the next winter meeting. Subsequently new observations arrive on the P.d.R. by the Communities of Rome, Montecchio and Turin. Generally, we tend to clarify, define the identity of the L.d.M. Turin makes a series of observations that touch all the points a bit, complaining about a more juridical than charismatic structure and very close to the characteristics of the Third Order, above all rejects the idea of

The Promise of the Lay Communities of Murialdo

O God, good and merciful Father,
we thank you for letting us know,
in the spiritual and apostolic experience
of St. Leonard Murialdo,
a wonderful opportunity to live,
as laity, the baptismal vocation.

Attracted by your personal, tender,
infinite, current and merciful Love,
we wish to respond to it
and make it known to the brothers.

This is why we Laity of Murialdo
(names)
We wish to follow the Gospel
according to the spiritual and apostolic charism
of St. Leonard Murialdo,
giving love to the people who are close to us,
especially to the young,
whom we meet every day on our journey.

Following the example of the family of Nazareth,
we want to live our daily lives
with simplicity, opening ourselves to the mystery
of God's plan in our lives;
committing ourselves to assume a lifestyle
that respects the poverty present in the world.

Sustained by daily prayer,
by your Word and the Eucharist,
we are committed to building a community of brothers
that lives deep relationships, in an atmosphere of listening,
of dialogue, forgiveness and celebration.

The Immaculate Virgin Mary,
San Joseph her spouse
and Saint Leonard Murialdo
may be traveling companions for us
and support our promise
so that we can be courageous witnesses
of God's love.

THE COMMUNITY OF MURIALDINE LAY PEOPLE 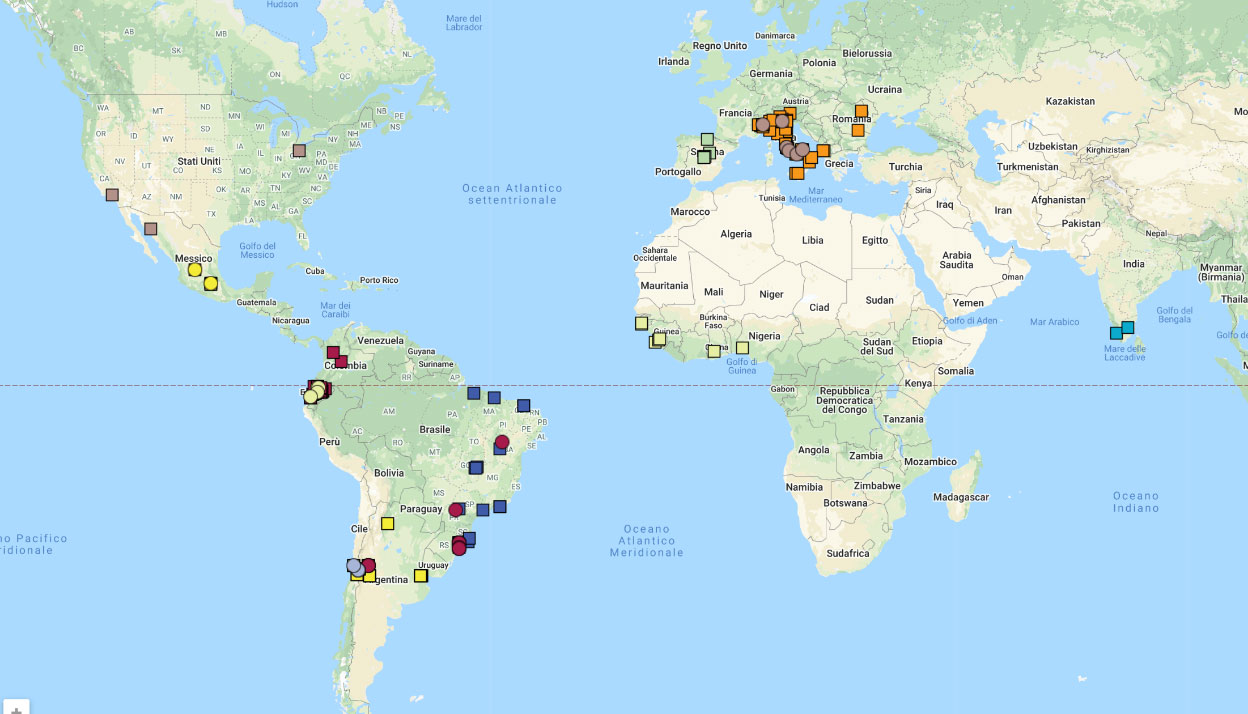 VISUALIZE THE MAP ON GOOGLE

THE COMMUNITY OF MURIALDINE LAY PEOPLE